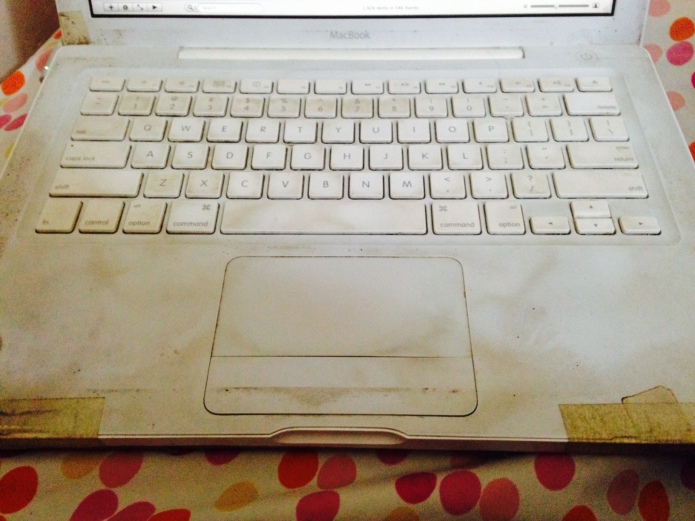 At eight hours, the screen darkens, my total clicks of the day flashes in neon-green, along with my day’s wages, at 2 cents per click. The supervisor stamps me out of the room and I collect my paycheck from the machine outside. The few friends I have envy this daily payment, but it’s only a reminder of my expendibility. Any day now, computers will be able to perform this job better and more quickly. I could arrive at my early am tomorrow to find that the bathrooms have been ripped out—because computers don’t shit—and the clocks taken down—because computers don’t care about smoke breaks. No notice or warning, and I would walk back down the stairs and stare into the rising sun, which I can’t see from The Room. I’d probably have to cover my eyes from all the light. And then

Well, I’d have to look for something else, wouldn’t I? Not the easiest task for the immobiley inclined, especially when the buildings are so tall, with all those stairs to climb. Employment insurance for people in my inclination group is expensive as hell; I’d have to work double time to cover the premium. Company knows it’s just a matter of time before they’re paying for me to keep on my ass. The government requires it but the look the other way fee is cheaper. I pay it, buy a little dinner, and bank the rest.

I like (liked?) reading prediction novels, the old ones that guessed what life would be like now. They amaze me, what people thought would happen and what they were right about and did happen. We still have physical books; they aren’t popular. A lot of jobs have been replaced by machines, but that doesn’t matter so much because the antibiotic resistant plagues swept through and killed a lot of us off. They’re under control again. For now. God still exists but Jesus has been disowned, a twist of logic I’ve never understood, but I wasn’t raised a believer. For what it’s worth, people seem to be nicer now, if I understand the past correctly. But that could be from The Loss, not the disowning. I try not to think about people or people thinking if I can. Doesn’t get you much.

Microapartments stuck. They’re one reason The Loss spread so quickly: 5,000 in a building, sharing a water and air filtration system. I sleep on the refrigerator and brush my teeth over the toilet. The kitchen table flips over into a closet. The dishes are stored beneath the sink, which doubles as shower. I have one of the more experimental models, which is one thing that saved me. The entire building was a test hub and none of us are connected. My next door and across the hall neighbors died. I closed the divider and read What We Lost about fifty times.  When I’m insomniac, I hear Betty shouting to her lover that the paint on the walls still isn’t dry. The shit that sticks in brains. After the All Clear sounded, I showered and waited in line until a clicker got sick and I was rehired.

That’s when my mother died.
******
Marcos is staring. Marcos stares at me around his computer, kitty-corner from mine, always, even on days when I don’t get my window seat. Otherwise, my neighbors change.

Everyone has noticed. “Marcos loves the Machine,” they whisper. No, they don’t whisper. They speak it to each other casually, in my presence, when I pass, or in the bathroom. One day, no doubt, it will flash across the monitor when reporting my figures for the day. The system can be hacked, and has been, that day my paycheck was five times higher than it should have been. Everyone’s. We were silent and the hack wasn’t reported until a weekly supervisor stamped out. The company tried to block our paychecks, but it was too late. It couldn’t fire so many of us because that would have been noticed and the hack been reported. We kept our money and our silence.

That cold, dry afternoon of unexpected wealth I took a train to the coast. It was warm and hazy, and I slouched at the end of a dock, waving my shoeless feet over the calm blue water. The fish haven’t returned, but it’s been only ten years since this area was declared Returned to Original (RTO). RTO and PR (Permit Required) for any human based activity, like swimming or boating (row and motor). But, a weekday afternoon, the beach is barren. I hold my breath and slowly, slowly slink a foot lower until it makes contact. Still silence. Deeper, deeper until I’m panting with the exertion of resisting the desire for my entire body to feel the cool slipper spreading over it. Thanks to the hack, I can afford the contact penalty; I cannot afford the swim penalty.

Some time ago I went with a friend—taken in The Loss—to a psychic. My friend was a great believer and insisted I try at least once, to the point that she paid the fee equal to ten days of clicking. “I’ll hate you if you don’t,” she said, handing me the damp paper ticket. I didn’t then, but I see now, the slight shaking of her hand and the pale amber tint to her eyes. The early stages. We’d been given pamphlets by the government and received messages over the emergency network, and the disconnected had received personal visits regarding the signs. ATTENTION AND TIME IS EVERYTHING. I’d laughed, as you do, as I do when the border between serious and humor is unclear. And that day it was. Did she know? Because….

No, I can’t give you that, the last of her. Not yet. We’re still strangers and I have too many questions. How did you survive The Loss and how much did it cost? Or did you even know about it, living so far up here? Was it something you only had to read or watch?