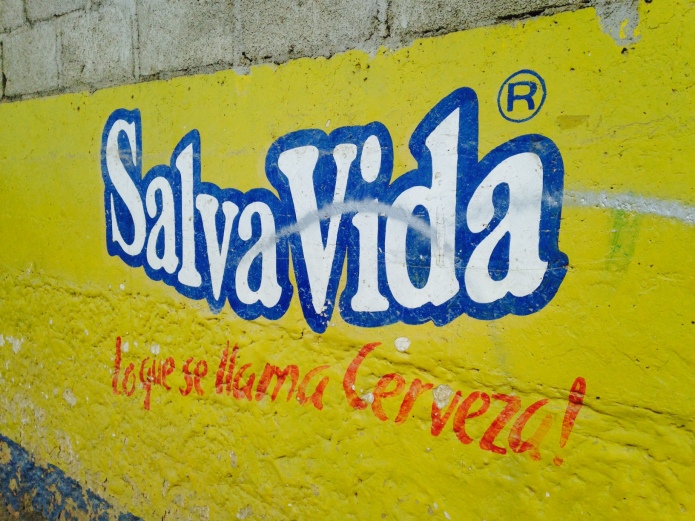 Here are a few observations that have been on my blog topic list for awhile but my brain has not yet formed into a full entry, kinda like a blog version of Radiolab‘s Shorts! episodes:

Dogs roam about the town, pant on street corners, sleep in the road, fight with each other, and bark at all hours. Sizes range from tiny to medium. Their minimal flesh clings to ribs and tailbones, unpadded by fat, their testicles outsized in comparison to their bony frames. Many have open sores and limp.  Most are male, for reasons I don’t want to fathom, and the females, with their distended and swollen nipples, look overused.

Dogs crawl through the fence that borders the school to scavenge for scraps (or participate in Monday’s Acto Civico assembly) and are chased or harassed by the children, though I did see a boy give a dog his lunch. Yesterday I tried to give one the stray bits of popcorn he was sniffing for under the table, but my movements scared him and he fled. Well, he fled when he saw the guard running toward him. They’ve learned a raised arm releases rocks in their direction.

Still, dogs here are dogs everywhere. They make friends and play with each other; even the scrawniest look happy-goofy as their tongues loll out, panting in the heat, and once a dark brown longer-haired mutt, who appears better cared for, goosed me in a friendly sort of way.

Those dogs with homes are used primarily for protection though I have seen a few well groomed, anything-but-fierce pups on leashes held by children. Some of my students speak fondly of a dog they once had and played with, and I’ve met a few lapdogs of the Chihuahua and Min Pin variety.

Dogs are the preferred pet, with cats prized for their rodent catching abilities. The cats are rough and ragged and refuse to be pet. Our house feels no ethical qualms that Nova, the cat that adopted us, may have belonged to a family, because we intend to spoil him as only cat-spoilers can. It took him no time to accustom himself to the new lifestyle.

People tend to be Catholic or Evangelical. Our teacher meetings start with a prayer, as do our Monday school assemblies. On Saturdays and Sundays, one of the houses across the road plays church services at top volume. When a minister leads a prayer, people also pray aloud, but some fervently, with their own words and at their own speeds. They close their eyes and raise their hands, sometimes pulsing their arms. This style contrasts with the listen in silence or repeat what the pastor said style I grew up with.

Traveling to La Ceiba, I passed many signs celebrating the love and peace of God, and all the hired vehicles dedicate themselves to Jesus and El Señor with worded inscriptions or paintings of Jesus in his crown of thorns or a cross. My favorite tuk-tuk is painted with a picture of the Incredible Hulk, who proclaims, “Soy El Hulk!” and a picture of a man, I assume the driver, who responds, “Soy un hijo de Dios!” the message, no doubt, that the man, backed by El Señor, can kick anyone’s ass. I call the chicken buses “Jesus buses” because when I first saw the inscriptions, I though they were used specifically for taking people to church. But, despite the odes to that higher power, no one finds it odd that the Jesus-blessed bus also shows hyper-sexual reggaeton videos.

I can’t deny that the religiosity bugs me. The poorer people are, the more religious they tend to be, and on its face, this doesn’t make sense. How can someone praise how they are blessed when there are bars on the windows and no food on the table? It reminds me of Freud’s observation that the pleasure we experience from relief of pain is a sick pleasure because to feel it, we first must feel agony (I wonder now if he was talking about S&M, in which case, I’m taking him out of context.). So people thank God for the food they have, overlooking or somehow justifying the days without it.

On the main road is a stretch of wall covered with a peeling advertisement for the Honduran beer, SalvaVida. It took me some time but I finally figured out why I find it so pleasing. My aesthetics have been corrupted by the ‘vintage’ look. In the States a person can pay very high prices for furniture either made of weathered materials, like wood or rusted metal, or designed so that it looks like weathered wood or rusted metal. You can pay people to make your stuff look old and worn out. It’s a pretty interesting people-with-money idea, and I’m as guilty as the next corrupted person to find my favorite bakery in Portland, Back to Eden, adorable with its use of old (or old-looking) cabinets and “reclaimed” wood. Then there’s the ubiquitous pictures of European villages and streets with centuries old buildings that are disheveling in an oh-so-quaint way…. So that SalvaVida sign? It fires all those quaint and vintage aesthetic receptors in my brain. But the thing is that there’s nothing fashionable about the look of peeling paint and crumble here. It’s the look of someone who doesn’t have enough money to repaint, repair, or replace. It’s the look of poverty.

How did that worn out look become so popular? What makes it so special, and is the pleasure confined to white urban people with money? When I see a worn out cabinet being used to store flour I think of how well it was made so that it is still useful now. I admire the use of real materials rather than a bunch of woodchips slathered with glue to make a board, then screwed together into a shelf that will definitely not survive the zombie apocalypse. I think of farms and outdoors and simplicity, when men were men and all we had to do was live on the land, that sort of nonsense fed to me by Hollywood. I think of when people cared about quality.

In other news, today is March 1. The countdown to the end of the school year is going strong, too strong. But that relief is mixed with panic as I wonder what is next.