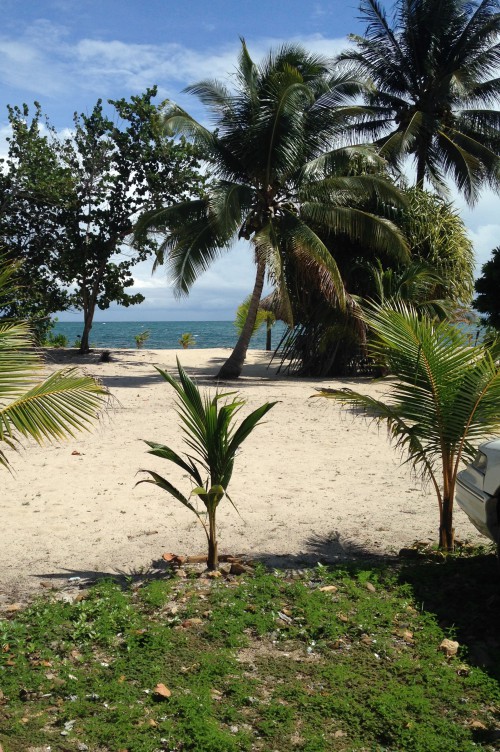 A week ago I returned from a blink of an eye trip to Placencia Village, Belize, a touristy beach peninsula with one main road. The transition back to school and its surroundings, even after such a brief excursion, was rough, but I think I’m back. 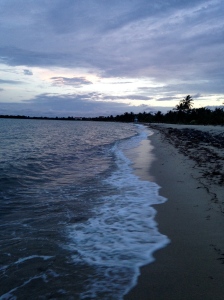 Technically we are here on tourist visas, 90 day stamps issued upon entrance. We can’t tell immigration we’re volunteers. While the school’s attorney works on our residency visas, something that is years in the attempt, we have to leave the country every 90 days, linger outside the border for a few hours or days, and re-enter. Guatemala isn’t good enough because it’s in the CA-4 region. The closest qualifiable escape destination is Belize, an 11 hour, 5 bus, 1 boat journey, plus 1 more and a taxi since we went to Placencia. Add in 2 currency exchanges and 2 border crossings. All for a two day stay. 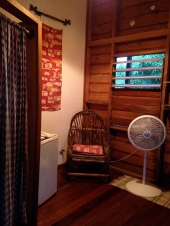 And what a stay it was. Nev 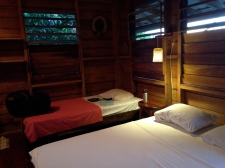 er have I so relished having my own room (see: A Room of One’s Own), hot shower water, potable water from the faucet, the ability to flush toilet paper, a reasonably quick internet connection. Consistent power. Consistent water. Miles upon miles of town to wander without accompaniment. The locals and I spoke the same language. (English is the official language though most speak Spanish or Creole as their home language.) These are all things I’ve taken for granted during my life, except for the past three months.

Oh delicious solitude here in luxury let me compose an ode to thee…the quiet, the independence, the crickets calling in the night.

Our inn was a minute to the beach, if that. Being the offseason, a little stormy, it was mostly deserted, a little seaweedy, with trash among the weeds. Between the inn and the sand ran a skinny sidewalk—or the skinny sidewalk that the town is known for—that I ambled down to the tip of the peninsula to find breakfast at a spot known for its smoothies and stuffed fryjacks, doughy pieces of bliss filled with beans, eggs, and cheese. That first morning, after breakfast, I walked along the shore, back to the inn, sandals in hand. I waved to one or two locals, admired the vast blue-gray water spreading west, calculated how to move there. Calculated how many meals I could reasonably squeeze into my stomach in two days. I observed happiness.

The Copán trip was full of a 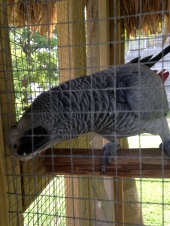 dventures; this was much quieter. I swam, exposed my thighs to sun, read in my room, on the porch, on the beach, in a cafe, avoided, mostly, the other volunteers, except for a brief bike ride north of the village center on new bikes with extremely uncomfortable saddles, and met a parrot named Oliver. I met two delightful women who run a cafe called Brewed Awakenings. The cafe served espresso, even decaf, chai lattes and kombucha (what?!), and delicious, luscious shakes with seaweed powder harvested sustainably. They stressed the coffee was roasted and the chai spices grown locally. (“Sustainable”? “Local”? Haven’t heard those emphasized in awhile.) The women, who spoke different Creole dialects, I was informed, admired my hair on the first visit, greeted me familiarly the second, and gave me a departing hug the third and final time. I wish I could have tucked them into my pocket and carried them back. Surely the locals need to experience the joys that are chai and kombucha and sustainably grown seaweed?

Delightful sums up those 2 days. I don’t like thinking too much about the trip, actually, because the transition back to life here, reality some would say, was painful, literally. Respites are necessary but the cost of re-entry may be too high at the moment. I fantasize about the solitude. The reading a book on the porch with frequent breaks to watch the cat descend the stairs into the rain at the house across the way. Walking along a deserted sidewalk to breakfast. Swimming alone in the ocean, chasing the waves. No one needing anything from me. And not worrying about anything. I could have done that for a very 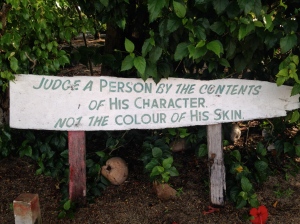 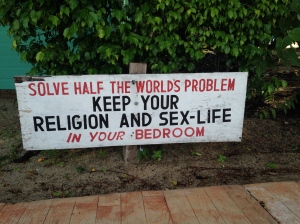 As I wandered, I wondered, of course. How can I have these moments of happiness more often, not just while I’m in Honduras, but ever? Or not happiness, but satisfaction and contentment, with bliss highlights. Over the past few years I’ve read so many blogs that say you get those by Doing What You Want Or Are Good At. Often this means the blogger is on a beach making money writing a blog about giving out advice on happiness. It’s circular, isn’t it? The people who are happy are writing blogs about how to be happy. So to be happy I should just write a blog about how to be happy, but anecdotal evidence and cherry-picking pop psychology aren’t my style, neither is cleverness, obviously. All this aside, how do I get here, to this beach, to what it represents? I want to believe that it can happen for me, but I don’t. I think it requires a sparkle of magic dust or a massively huge sense of self-worth that isn’t growing in this little garden.

I met a man from Vancouver B.C. who moved his family here a few months ago. They’ve rented a house for a year. Yep, the dream is real. I didn’t inquire after his secret, but our conversation lead me to suspect money.

Well, those last bits are little downers, aren’t they?

Other interesting trip moments: Puerto Barrios, Guatemala—Look at all these women driving and riding on motorcycles and mopeds!

Rapidito to Frontera (border), Honduras—A 60+ year old Guatemalan man and I have a very rough conversation. Honduras is dangerous, Guatemala is beautiful, he has a friend in New York, or maybe it was Florida. I enjoy the conversation but wonder if I should be worried that he will get off at our stop and then want something. This is actually something I fear in any stranger-meeting conversation, no matter where I am. Sigh. Introversion + anxiety = distrust of anyone.

Placencia grocery store—Should I buy this dark chocolate Milky Way bar for the shear reason I haven’t even had the option in months?

I suppose I will end this post dangling and unresolved. I want to keep Placencia in a little bag like some precious object. Once I was happy here. 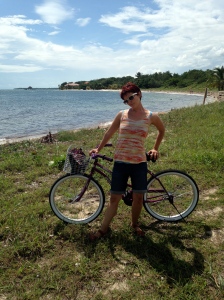 I attempt to look bad ass with my purple bike.

2 thoughts on “Placencia and Virginia Woolf”